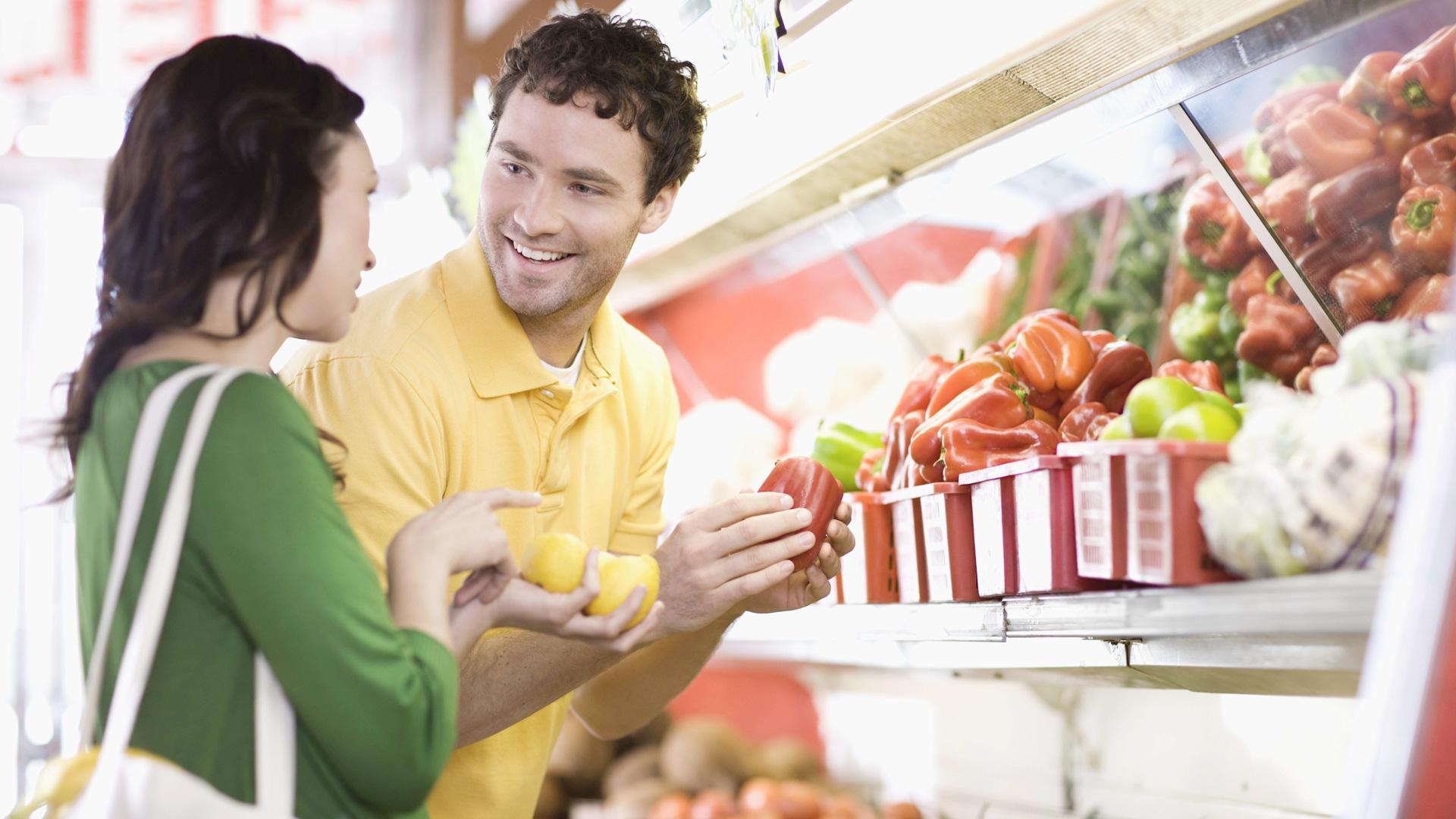 By prescribing diet and exercise, James Anderson, M.D. of Lexington, Kentucky, and colleagues stopped insulin completely in two-thirds of their lean diabetic patients, and reduced the amount of insulin in the other third. 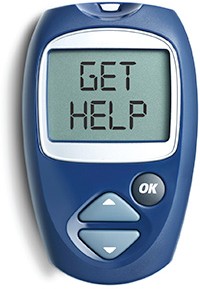 Haven’t physicians prescribed diabetic diets for years? So what’s new? Just this. For over 70 years, traditional treatment for diabetes has been a high fat diet with insulin by injection, or oral administration. Justification for prescribing the fat diet is that it keeps the blood sugar from rising too high after a meal and it prevents too much sugar from spilling into the urine.

But the disadvantages of fat diets far outweigh the advantages. Dr. Anderson told his audience what the disadvantages were. The fat diet does not reduce blood sugar, nor the insulin requirement to handle the excess sugar In the blood. In fact, it tends to make the body less sensitive to insulin and induces resistance to it. Elevation of blood fats leads to atherosclerosis and promotes ketosis. Atherosclerotic plaques in the arteries can cause coronary occlusion or stroke. Ketosis is the accumulation of certain chemicals (ketone bodies) in the body tissues and fluids, which can be detected in the urine of poorly controlled diabetics.

Other diets that help control diabetes are high protein, high carbohydrate (CHO) and high fiber diets. Protein diets seem to prevent a significant rise In blood sugar, but are “impractical, monotonous, expensive and high in fat,” hence are not recommended.
Refined CHO diets (sugar, white flour, white rice, etc.) elevate the blood sugar after meals, as well as increase fasting triglycerides. Such a diet is a detriment in treating diabetes, and is no treatment at all. 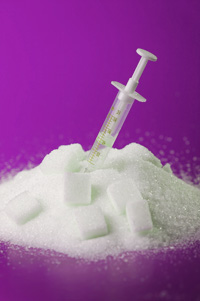 However, when complex CHO’s compose most of the meal, these disadvantages do not present themselves. By complex CHO’s Anderson means whole grain bread and cereals, brown rice, bran, fruit, vegetables, and no sugar.

He contends that the person on a complex CHO program responds well to insulin. The body better utilizes the CHO and glucose in the food. When mildly diabetic persons switch from 45% CHO to 85% complex CHO, their glucose tolerance test improves.

After a low fiber meal (the typical American diet), blood sugar shoots up rapidly. This stimulates a spurt of insulin Into the blood stream. The resulting overabundance of insulin sends the blood sugar down as rapidly as it ascended.

No such abrupt response of insulin to glucose absorption occurs after eating a meal high in fiber, for there Is no rapid rise in blood sugar. Fiber slows the digestive process so that absorption of glucose proceeds more slowly. The rise is not as high and is more sustained.

Most Americans on a high meat diet eat between 14 and 20 grams of dietary (plant) fiber every day. The Lexington diet, first introduced almost ten years ago, provides 65-70 grams, considerably more than the average.

Dr. Anderson explained that for proper responses, insulin must link up with insulin “docking sites” (receptors) on the white blood cells. For insulin to be properly utilized, the docking sites must be filled with insulin. Here is another advantage of a high fiber diet–the fiber Increases the number of docking sites. Obese individuals lack the acute sensitivity to insulin, because their insulin receptors are fewer in number, hence fewer sites for insulin linkage.

In addition to decreasing the rapid rise of blood sugar after a meal and increasing the number of insulin docking sites on white cells, a high fiber diet lowers blood fats, helping to carry cholesterol out of the body. It keeps the blood sugar at a lower level than with a fiber-free meal.

Exercise along with the diet is important. Some of those who reduced the amount of insulin by means of diet, but who could not go off completely, have by exercise over a period of time been able to go without insulin. But they had to faithfully adhere to the diet and exercise every day.

By far the majority of people stay on the program. They enjoy the food, for it is palatable, practical and attractive. The whole family would benefit health wise from eating this food.

The Lexington diet rates as good, or better, than the recommendations of the American, British, Canadian and Australian Diabetic Associations. All of them do recommend increased fiber intake, but only one recommends that cholesterol be decreased. Anderson suggests that 55% to 60% of energy from food should come from CHO and only 15 to 20% from protein. Fats, cholesterol and sugar should be restricted, but generous amounts of fiber be used.

Do you doubt whether this diet can really replace insulin, even in two-thirds of diabetic individuals- Studies conducted on patients with elevated blood sugars showed a prompt decrease, and within two weeks insulin was discontinued. Not only that, but triglycerides (blood fats) and cholesterol also decreased, thus lessening risk of coronary heart attack. Blood sugar control proved better on a high-CHO, high-fiber diet than with previous fat diet plus insulin.

Will blood sugar stay down so that insulin can be relegated to the cupboard- That depends on the individual patient and his faithfulness to the eating and exercise program. Dr. Anderson has followed patients for eight years. Those who adhere to the diet carefully do well, he ways. “None of those who stay on the diet need to take insulin again.”

The doctor told of a man whose triglycerides were 15 times, or -more, above normal and his cholesterol three times. Blood sugar, of course, was elevated. These all Improved on the diet for the short stay in the hospital and three weeks at home. When, however, he yielded to his strong craving for hamburgers, all figures shot up to their former level.

If you wonder where you can obtain food that the Lexington diet calls for, Just trot down to your supermarket. Select various garden vegetables and fruits, whole grain baked goods, cereals, and bran. It is largely vegetarian, but for those who think they can’t do without meat, Anderson permits three ounces of lean meat per day.*

When asked what he thought of a diet without any meat, the doctor replied, “I think a vegetarian diet is excellent for people with diabetes.”

If you have been sticking yourself for years or taking oral diabetic medications, consider asking your physician to try you on the Lexington type diet and exercise.** But you must cooperate by carefully adhering to the program for the rest of your life.

Dr. Anderson and his team discovered that a high carbohydrate (CHO), high-fiber diet best controlled the blood sugar of lean diabetics. What about those who are fat? How do they respond to such diets? He then discussed the four options open to obese diabetics: 1. Insulin, 2. Sulfonylureas, 3. Exercise, 4. Diet.

On a high-CHO\Fiber diet, plus exercise, 80% on insulin won’t need any. The 20% who do can reduce their dosage by 80%. For the diet to effectively keep blood sugar down– and this presents a major handicap—the person must be motivated to stay on the program for life.

The Lexington team first worked with obese diabetics who were already on large daily doses of insulin—50 to 90 units. On an intensive regimen of an 800-calorie high-fiber diet2, four out of five (80%) no longer needed Insulin. Of those who still required it, the average dose was reduced by 80% for most effective control.

As was true for lean diabetics, this diet for fat individuals is high In CHO (55% of energy Intake) and low in fat. Fiber content Is high also–32 grams per 1000 kilocalories, compared to 15 to 25 grams that their own home diet had provided previously.

The researchers fed their patients oat bran cooked cereal3 with skim milk for breakfast, a vegetable plate for lunch; and navy beans, oat bran muffins and margarine for supper. An evening snack4 consisted of graham crackers and water or a low-calorie beverage.

Eating the recommended diet, the patient can expect his triglycerides, cholesterol, blood sugar, weight and his need for insulin injections to decrease. The insulin requirement for these hospitalized people dropped from an average of 66 units to one unit in 21 days.

In a number of ways, says Anderson, high-CHO diets have major advantages for obese people. For diabetics, they enhance tissue sensitivity, which means improved glucose absorption. Glucose metabolism is stimulated, and it slows down the production and output of glucose from the liver.

High-CHO food preserves liver function, prevents ketosis, improves nitrogen retention, and suppresses the release of free fatty acids, which, in excess, can lead to ketosis and block insulin action. The use of common sense, vegetarian, high-CHO, high-fiber foods by obese diabetics, Dr. Anderson discovered, increased the satiety of the patients, lowered their blood sugar and their insulin requirements. Injections of insulin In 80% of dieters was eliminated. The lower cholesterol and triglyceride values amounted to bonuses.

For non-insulin-taking patients, fiber curtails the release of insulin after meals, thus preventing hypoglycemia, and they contribute to the lipid-lowering effects of these diets.

The research done, as described by Dr. Anderson, is good news for diabetics, who have been “shooting” themselves with insulin for decades. If you are one of them, you have a good possibility of throwing away your syringe. But even if you can’t, you will be able to substantially lower the quantity that you must still live with.

To maintain your lowered blood sugar and weight loss, you must, for the rest of your life, religiously follow your eating plan and daily exercise program. Many are doing it. It is possible. Determine that you, too, will conquer your problem.

————————————————————-
*Whole grain flour, bread, cereals, bran, pastas may be purchased at a health food store.
**VEG-A-WEIGH, Wildwood, the Loma Linda School of Health, the Seventh-day Adventist Church Health Department and certain other conditioning centers have advocated this type of diet for a better lifestyle, good health and weight control for many years.